Takes a lot to scare Nadine 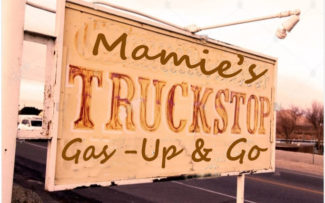 Hey, everbody – been sittin’ here at Mamie’s counter, talkin’ over old times with some of the truckers still drivin’. Sometimes I miss it somethin’ fierce an’ other times – like when it’s snowin’ and blowin’ and icin’ ever square inch of highway – I don’t miss truckin’ at all. Nadine was off work, an’ had taken Flora to the doctor to get her cast off an’ they was takin’ the cat to get her lil’ cast off too.

“We’re gonna stop off an’ buy cat food, an’ some groceries an’ pay the light bill, so you’ll have to force yourself to eat at Mamie’s today,” Nadine said, as she went out the door.

Well, now, that’s a really good day, in my estimation. Mamie’s has the very best truck stop grub you ever put in your whole mouth or dabbled a spoon in. So I got over there early, to get the Lunch Special. Didn’t care what it was; ever lunch at Mamie’s is special. Not that Nadine ain’t a good cook – she really is, when she sets her mind to it. But she doesn’t have Himalayan crushed salt to sprinkle on things, nor mushrooms picked in some forest in France an’ shipped over for the final garnish in spaghetti sauce.

Anyway, Dan Campbell was there too, an’ he got this big grin on his face an’ said, “Hey, Miles, since your better half isn’t here, how about tellin’ us a Nadine story?”

I started chucklin’ to myself when I thought of a good one. “Well, we had had a rough week, tearin’ around the entire Southwest, deliverin’ lil’ dibs and dabs just ‘bout all over the Four Corners states an’ then some. We was wore out when we finally got to pull over for the night. I snagged the last spot in the parkin’ lot at the truckstop an’ we turned into the bunk for some much-needed rest.

“Musta been about two in the mornin’ when Nadine got up to get a sip of water an’ took a look through the curtains between the cab and the bunk like she always does. Jiminy crickets! Nadine scurried back to the bunk an’ shook me awake.”

“Miles! Miles, wake up, wake UP, you ol’ coot! There’s somethin’ huge leanin’ over the truck cab, arms raised up like it’s gettin’ ready to grab the truck itself!” She was tryin’ to yell quiet like, an’ she was really scared.

“You’re dreamin’, Nadine. I told you not to eat that last Twinkie afore bedtime.”

“No, Miles, there’s somethin’ out there! Go look!”

Well, just to calm her down, I went to the curtains an’ took a good look. She was right! They was somethin’ leanin’ over the truck all right – but she’d neglected to tell me that it didn’t have a head! I swallowed real hard, an’ said, “Honeybunch, has that – whatever – moved at all since you saw it?”

“Well, she sat down real hard on the side of the bunk an’ whispered, “What’ll we do?” See, this was back before cell phones or any kinda device like that was around to talk to people or call for help. So we was gonna have to get ourselves outta this fix, an’ quick. ‘Bout then, KA-WHAM! That whatever-it-was had hit our truck, an’ mighty hard, too.

“Nadine jumped an’ wrapped her arms around my neck an’ hung on tight ‘til my eyes bugged out an’ she was screamin’ in my ear. I tried to pry her loose but she wasn’t lettin’ go, an’ then I heard bangin’ on the cab door.

“State Police! You folks okay in there?”

“What’s got aholt of our truck, Trooper?” I hollered, an’ Nadine stopped screamin’. She was so glad to hear a trooper outside – an’ I was, too.

“You better come take a look. I’m afraid there’s been some damage to your truck, driver.”

“So we crawled outta our cab an’ into the moonlight at the newly-finished Triple T Truckstop outside Tucson – an’ a huge monster cactus was layin’ right on top of the pigtails, crunched up agin the fifth wheel.

“What is that thing, Officer?” Nadine ast him.

“It’s a Saguaro cactus, ma’am. Lucky neither of you were outside when it toppled – we’d be pulling cactus spines out of you for a week,” the Trooper told us. “From the looks of it, somebody hit it with a backhoe or something as they finished scraping down the parking lot before they paved it. That’s what weakened it, and it finally fell.”

Well, everbody at the counter had a good laugh at my ‘monster’ story, an’ then Erleen said, “Miles, I see Nadine driving around to your sister’s RV.”

So I finished my lunch an’ went to help unload the groceries. That there sawhauro had given a few people a good laugh, anyway. An’ I’d gotten a big slice of Mamie’s Maple Buttercream pie with real whipped cream. Sure beats a Twinkie any day.