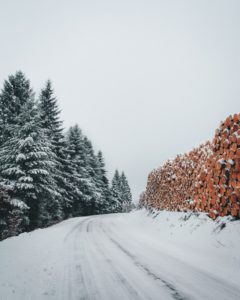 There’s nothing wrong with your computer… We are controlling transmission. For the next few minutes, sit quietly and we will control all that you read. You are about to participate in a great adventure. You are about to experience the awe and mystery accompanying every truck which traverses the American Highway – as you enter The Trucker Zone …

Driving a semi-tractor trailer in the winter has its own particular idiosyncrasies that will make even the most seasoned trucker ask, “What am I doing out here?” Here’s a story about one of those times.

It was the middle of January, during a particular series of winter weather events in which a trucker really had to plan carefully the route he was going to take cross-country. The most direct path was not always the most favorable when it came to the weather. I’d learned over the years the best way to avoid the worst winter weather was to not be on a highway directly below a jet stream. Best to be 200 miles south or even north of the center of any jet stream. However, this particular January saw multiple jet streams carrying cold arctic air out of Canada and meeting up with southern low-pressure systems laden with moisture. The mixture combined for some epic snowstorms.

We had a load of digital signal equipment for TV towers that spanned from Spokane, Washington, to Seattle and then down to Portland, Oregon. The value of the load was in the tens of millions of dollars. I’d looked at the jet stream forecast prior to leaving Massachusetts headed west and then checked for changes each evening after we shut down. From the forecast, it was determined the weather was going to follow I-80 or I-70 for most of its jaunt from west to east. We determined that taking Interstate 90 across the country should keep us well north of the most severe portions of this particular storm.

As both experience and luck would have it, we had very cold but uneventful weather all the way across through Missoula, Montana. But as we reached the truck scale just west of St. Regis, between the 16 and 15 mile markers, the sky turned from that endless Montana blue to the dark gray of a foreboding storm making its way across the mountain pass. I checked into the scale house and was informed they didn’t permit parking, but the officers in the scale house indicated they were only expecting a light dusting. So I elected to continue up and over the pass. Everything was going well for the first 10 miles until we reached about a mile north of the Shamrock Gulch Rest Area at Mile Marker 5.

As we’re crossing a long bridge, a fire truck frame (just the cab with nothing but frame rails and rear axle) does a 360-degree spin about 200 yards ahead of us on the bridge we’re crossing. I know that if it’s that slick I must maintain momentum without any abrupt changes in road speed to make it across the bridge without jackknifing, but I go ahead and ease my foot off the accelerator to reduce my road speed. By the Grace of God, the driver of the fire truck was able to gain enough control to get on the shoulder of the bridge, and I eased into the left lane and passed him with a lane between us.

As we continued up the mountain the two-lane interstate was collecting more and more snow – arriving quickly at the point where only the right lane was still drive-able. I’d gotten the 80′ tractor-trailer into the tire grooves of the right lane and was maintaining the needed momentum to climb the mountain. As we came upon another curve, it was obvious the left lane had not been plowed the closer to the top of the pass we got. Past the curve, the depth in the left lane was a good two or three feet of snow. It was as I entered the curve I caught movement in my left mirror of another tractor-trailer attempting to pass me in the left lane. I immediately ascertained there was no way he was going to get past me before he hit the three-foot wall of snow and ice in the left lane just around the bend.

I quickly pulled my foot off the accelerator and eased the truck as far right as I could without taking the left drive tires off the dryer pavement onto the snow-covered shoulder and into the side of the mountain. The truck and trailer which was owned by a very well-known mega-carrier came flying by my left side within an inch of my mirror. The only prayer I was saying was, “Please God, don’t let him hit his brakes when he sees the left lane is covered in snow and ice – and please don’t let him put us into the side of this mountain.”

The truck and trailer hit the snowbank with what looked like an explosion as we were sprayed with snow and ice that covered our 80′ truck from stem to stern and from top to bottom, sounding like we’d just been hit by a severe hail storm. It was a good minute before I could see the road again. I took a couple of really deep breaths, made sure my shorts were still clean and looked to see if my wife was OK. Let’s just say she had turned whiter than the fresh snow outside. (I think it was at that point she determined trucking wasn’t her cup of tea.) I then eased the truck back into the tire grooves of the right lane and thanked the Lord, while I cussed a storm over the CB to the driver who almost put us into the side of the mountain.

We traveled on up the mountain then without further incident and when we finally reached the top, I got a call on the CB. “Mr. United, this is the snowplow behind you. Can you ease to your right about 5 feet and let me by? I’ll clear you a path to the bottom.” I did, then flashed him over by turning off and on my headlights when he’d cleared our truck. He gave me a flash of his taillights and came back on the CB: “You folks be safe, and have a good day.”

We now return to you control of your computer.

So, fellow truckers, do you have a similar “winter mountain pass crossing” story? Please post your story in the comments.